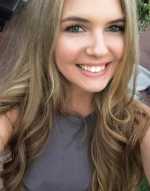 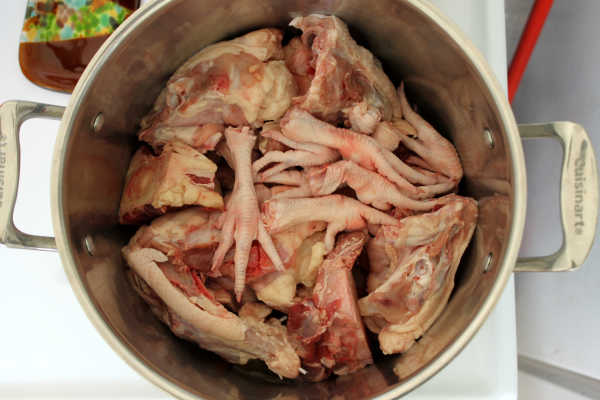 Bone broth benefits every part of your body - from your brain to your gut, to your muscles and ligaments. Bone broth puts the “super” in superfood. Not only is bone broth packed with vitamins and rich in nutrients, but it is also inexpensive and easy to make! Bone broth is a win-win, especially when you are a DIY dog mom like me who loves finding new at-home ways to boost your pup’s diets! 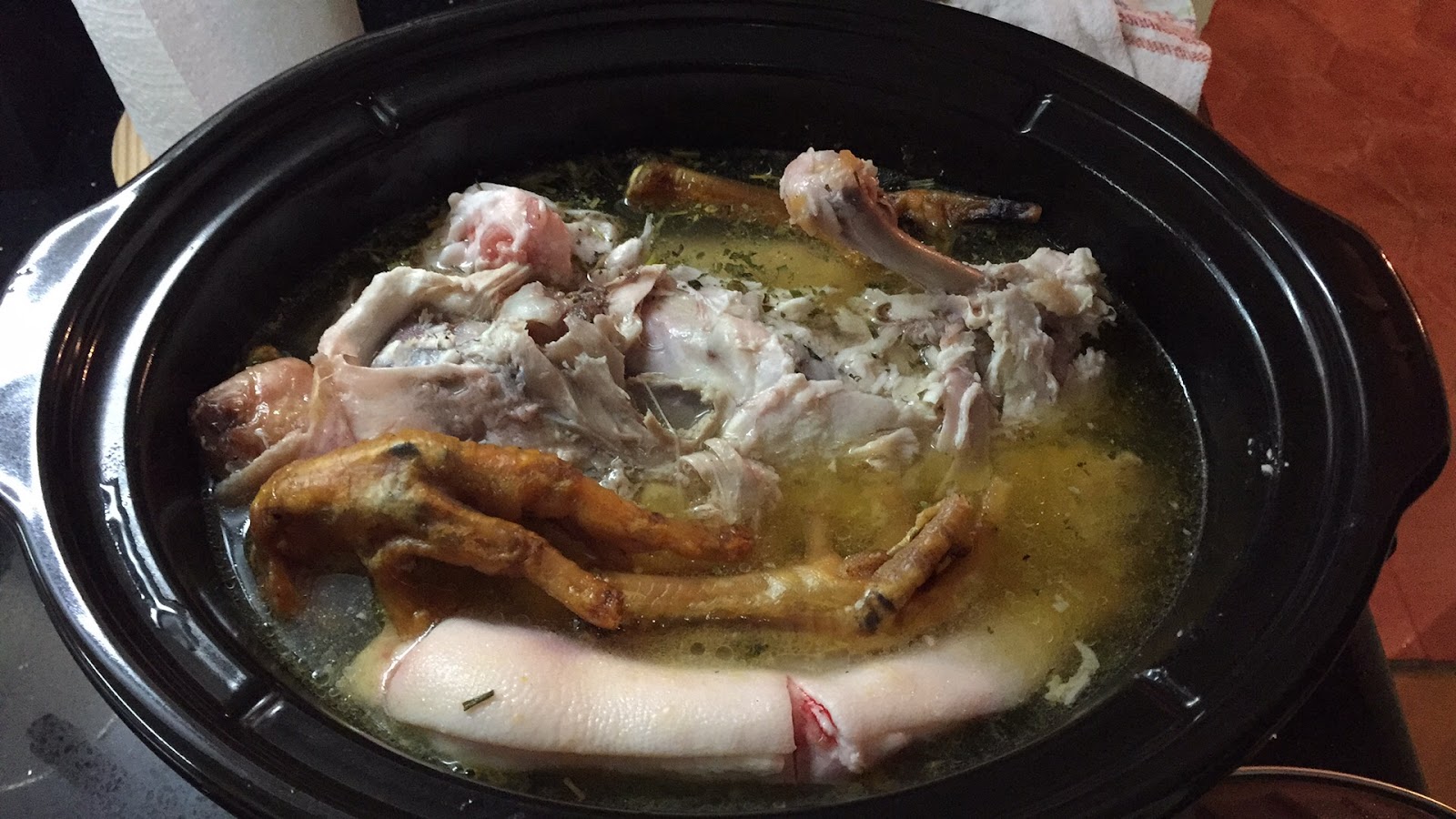 What is Bone Broth?

Bone broth is made from animal bones and connective tissue that have been boiled down into a broth using filtered water and apple cider vinegar then slow simmered for at least 24 hours. Although you can use just about any protein you would like to make bone broth, common proteins used are cow, chicken, pork and lamb.

Because the benefits of bone broth are numerous and extensive, the history behind bone broth dates back centuries. Back in the day, it was rare to get a successful hunt, so every part of the animal (not just muscle meat) was used. In South America, bone broth was so popular and respected for its health benefits that a saying emerged about it: “Good broth can resurrect the dead.” Bone broth provides vitamins and minerals, supports digestion and the immune system, and helps with inflammation and detoxification. By simmering bones in water and apple cider vinegar, nutrients are released from the marrow within the bones and also breaks down other tissues into the water. Bone broth is one of the world’s best sources of natural collagen due to the bones and tissues. Bones themselves are rich in nutrients and vitamins such as calcium, magnesium and phosphorus. When you cook collagen, it turns it to gelatin, which provides the body with amino acids - the building blocks of proteins. Some of the amino acids present in bone broth also aid in digestion, and adding bone broth daily into your pup’s meals is an easy way to get anti-inflammatory amino acids into the body.

Now that I have piqued your interest, here are the top 5 benefits of bone broth

As we get older, cartilage deteriorates as it gets attacked by antibodies. When bone broth is left to simmer for at least 24 hours, collagen from the animal bones and tissues leeches into the broth and becomes absorbable to restore cartilage. Drinking collagen doesn't directly lead to building cartilage, bone or joint tissue. However, the collagen in bone broth is broken down into amino acids and used to build tissue where the body needs it. Two studies were done on humans - one in 2016 and one in 2017 - that got my attention.The 2016 study looked at the effects of type 2 collagen in people who had osteoarthritis symptoms in their knees. They found that the collagen came from the connective tissue of chickens! The results show that collagen can improve joint symptoms like pain and stiffness in people with osteoarthritis. The 2017 study actually appears in Sports Medicine and suggests that both laboratory and animal studies show that gelatin supplementation increases the amount of collagen in the tissues, which help protect the joints from stress. In addition to all of this collagen talk, bone broth also contains the compounds chondroitin sulfate, glucosamine, and hyaluronic acid which aid in inflammation and joint pain.

Raw fed dogs that are fed lamb, beef and pork are high in the amino acid glycine, although feeding bone broth to a raw fed dog doesn’t hurt. Kibble fed dogs may benefit most from bone broth and the amino acids because amino acids can be killed during the heat processing. Not to mention, kibble is extremely dry, so bone broth adds moisture back into the diet.

Because bone broth is easily digested and soothing to the digestive tract, some pet parents like to feed bone broth solely for it’s digestion purposes. When your pup gets a stomach ache, one of the most common methods used is chicken and rice. The problem with this is that rice is actually known to be inflammatory and hard to digest. I have fed chicken and rice myself, but have actually found bone broth to be a better, more bioavailable alternative. After all, food is only useful if we are able to absorb its nutrients. Glutamine, an amino acid in bone broth, helps to reduce gut inflammation, aid in digestion, and regulate the secretion of stomach acid. Studies have also found that glutamine helps heal the intestinal barrier in human and animal models which help with leaky gut. In addition to glutamine, gelatin and collagen both play a huge role in supporting a healthy GI tract, too. Gelatin is beneficial for restoring strength of the gut lining, fighting food sensitivities, and stimulating the growth of healthy bacteria (probiotics) in the gut. When dogs (and people) have digestive imbalances, serum concentrations of collagen decrease. As I mentioned before, amino acids in collagen build the tissue where the body needs it, so feeding collagen (bone broth) can support healthy digestive function.

Bones with marrow are rich in nutrients such as: iron, protein, fatty acids, manganese, selenium, zinc and vitamins A, K, D, and B. Bone broth also contains minerals in forms that your body can easily absorb such as calcium, magnesium, phosphorus, silicon, sulphur, anti-inflammatory omega-3 fatty acids and even more! Also, simmering the connective tissue into bone broth provides the body with natural compounds from the cartilage.

On a daily basis we are exposed to a variety of different pesticides, artificial ingredients, chemicals and environmental toxins of all kinds. A dog’s body often has a hard time keeping up when submerged with an overwhelming amount of chemicals, and that’s where bone broth comes in. Bone broth assists in detoxifying while it helps the GI system expel waste as well as promote the liver’s ability to cleanse and remove toxins. Bone broth is a great way to get glutathione, which helps with elimination of fat-soluble compounds such as heavy metals (mercury and lead) and lowers oxidative stress. To top it off, bone broth stock contains glycine and potassium which both support cellular and liver detoxification as well. By adding veggies, herbs and garlic to the bone broth, you are supplying sulfur which also boosts detoxification.

Keep in mind that although bone broth assists with detoxification, bone broth is not the answer to any liver issues. If your dog’s liver is not functioning correctly, that needs to be taken up with your Veterinarian, not to rely solely on bone broth.

When a dog’s immune system is taxed, bone broth saves the day. Dehydrated or sick dogs (diarrhea, vomiting) can benefit tremendously from bone broth due to the amino acids and glutamine found in the broth. 70-80% of the immune system is situated in the gut, so with a happy gut is a happy immune system. In fact, a study of chicken broth conducted by the University of Nebraska Medical Center found that the amino acids that were produced when making chicken broth reduced inflammation in the respiratory system and improved digestion. Since research proves bone broth can boost the immune system, its been found that the broth can also heal allergies and arthritis.

Now that you have learned the benefits of this superfood, you are ready to start cooking! This the fun and easy part. You will need:

Bones: You can feed any protein and any bone you would like, including fish! Keep in mind that although it’s not necessary, your pup will benefit most from grass fed, organic bones. Commonly used bones are different feet, tails, marrow, knuckle and neck bones. Knuckle and neck bones have a lot of collagen, which is a key nutrient in the broth. You can also add ligaments and skin, too!

Filtered water: There are dangers of consuming/cooking with tap water as it can contain remnants of pharmaceutical drugs, antibiotics, pesticides, and petroleum products (that’s only naming a few.) If you are feeding high quality bones, veggies and herbs it’s important you don’t overlook the quality of the water that they are all simmered in for days!

Crockpot: Using a crockpot allows slow cooking and best results. However, since slow cooking may take days, if you are worried about leaving the crockpot on while you are away, you can always use a pressure cooker.

Apple cider vinegar: A key ingredient to add is raw apple cider vinegar (or lemon juice) to the crockpot because this ensures your broth has all of the healthy gelatin in it and will draw the nutrients out of the bones. You know you added the right amount when you see a thick gel coat the top of your broth.

* While gel is satisfying to see, it's not imperative. All of the collagen that supports joint and GI health is still there, it's just liquefied. However, if you would like the gel, try adding a bit more apple cider vinegar next time (around 1/4 – 1/2 cup.) 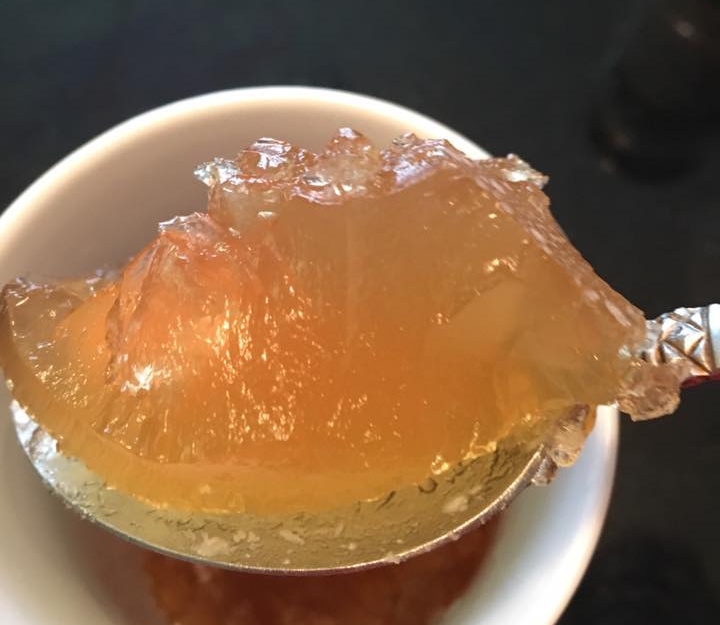 You may also want to add veggies, garlic and some herbs for added nutrients, but it’s not required. 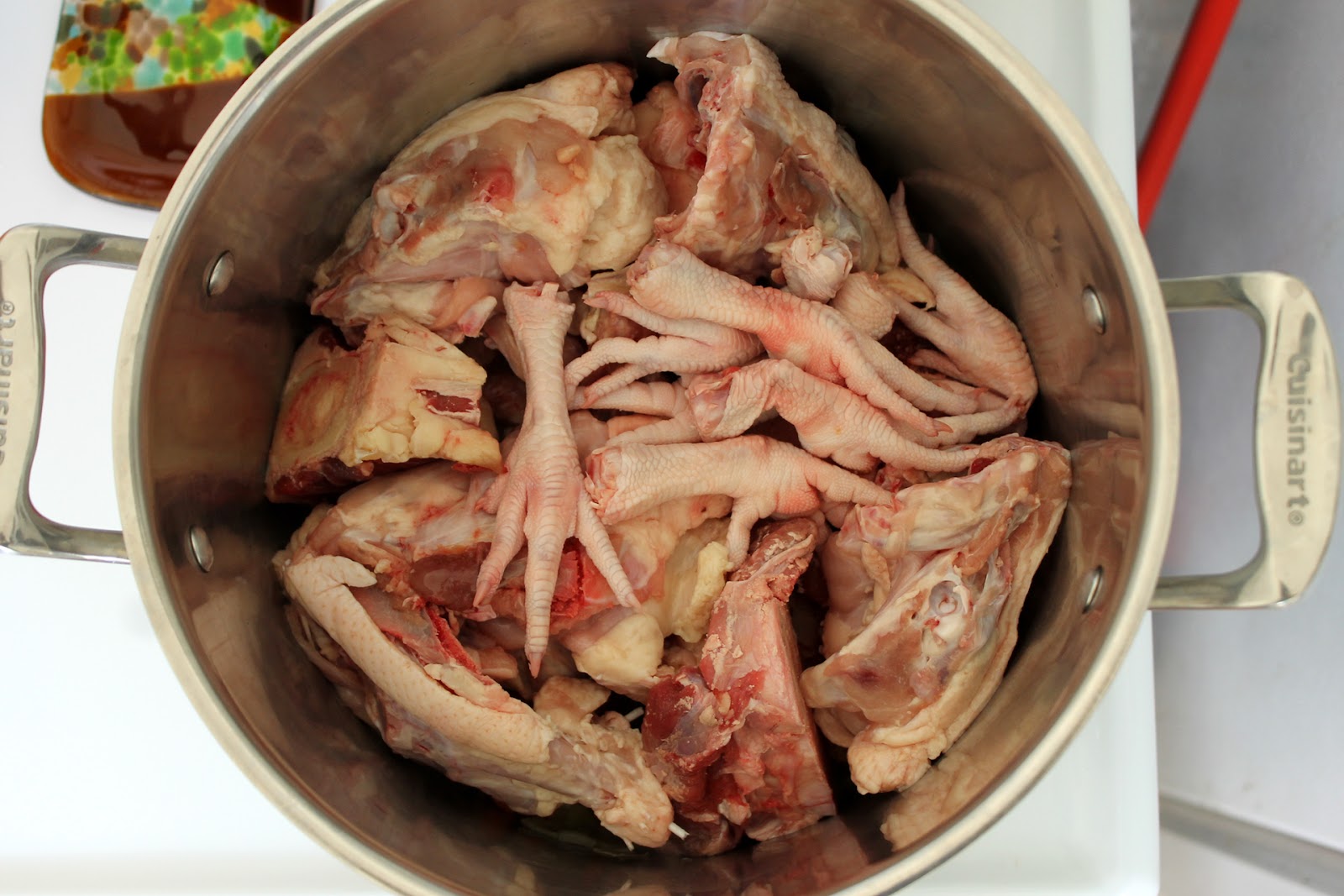 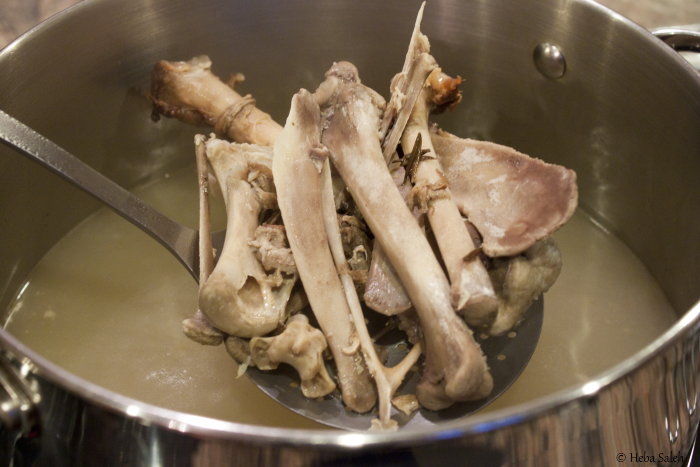 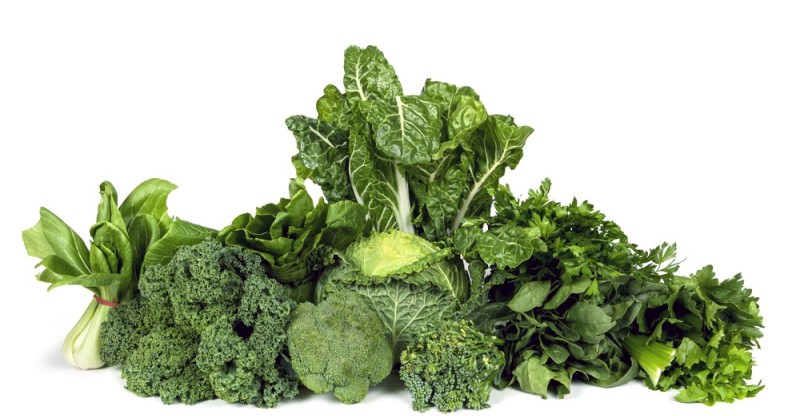 * If your pup isn’t a fan of certain veggies, bone broth is the best way to mask them! 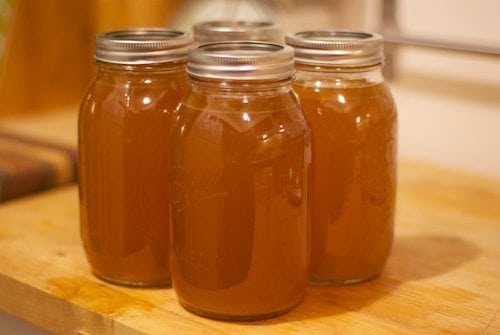 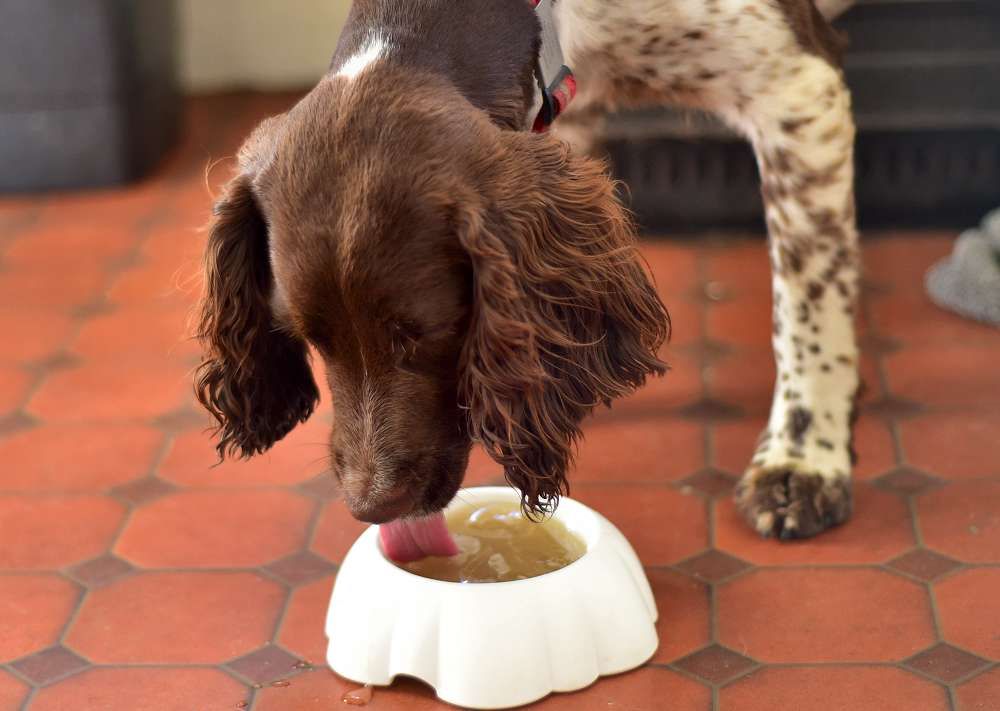 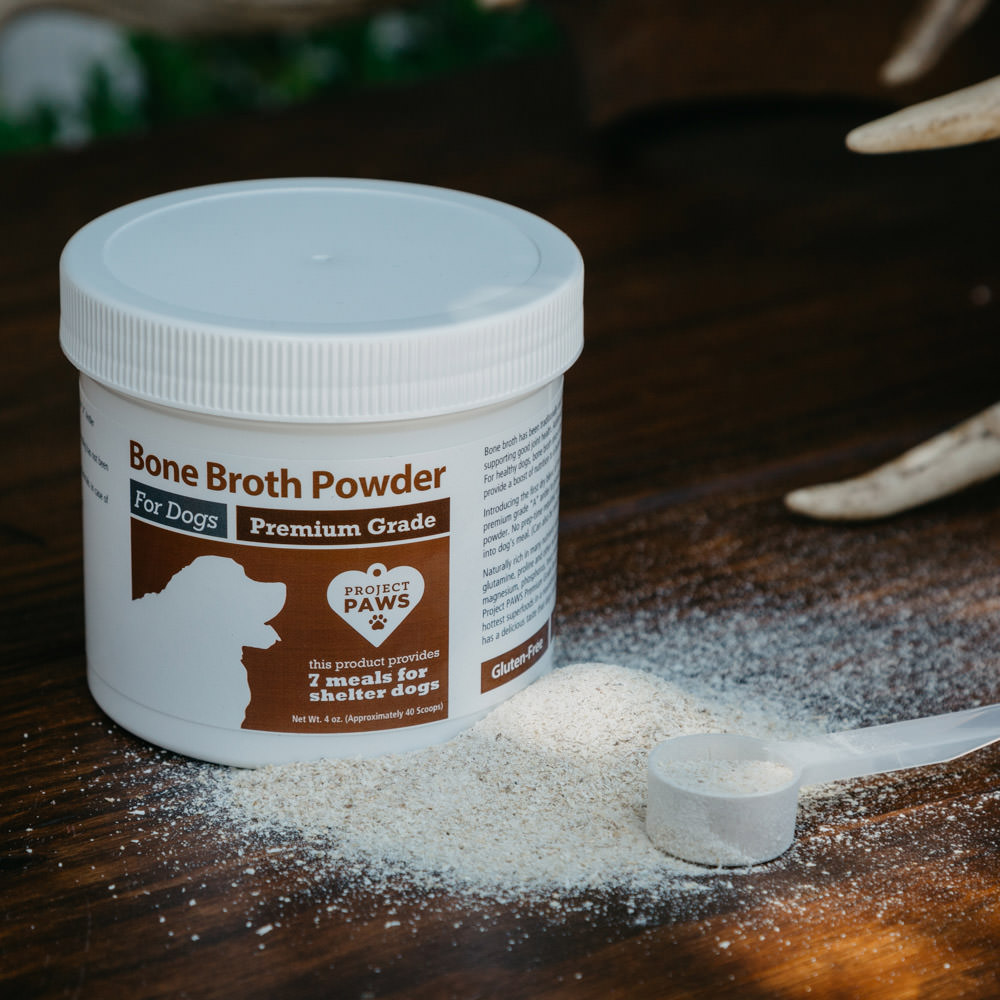 You can find bone broth at most grocery stores, however many store-bought broths are made with lots of sodium, additives and ingredients like MSG (meat flavor but can have negative health effects.) Nutrition researcher, Sally Fallon, states that most store broth today is not “real.” If you want real bone broth and all of the benefits, it's best to make it at home. However, if you would prefer a bone broth already made for convenience, look for a high quality broth made with grass fed, organic animal parts (bones, skin, etc.) that are human-grade. You also want to make sure that the animal parts are pasture-fed and free of antibiotics and hormones to really unlock all the bone broth nutrients.